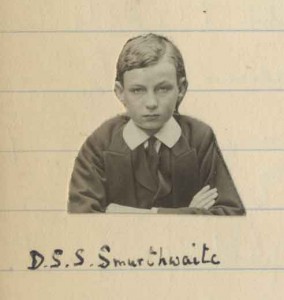 . Smurthwaite arrived this morning, still very lame but very pleased and delighted at being back!!! It was quite nice to have the door thrown open for me (a self-constituted duty on his part) after prayers tonight.

Father went to Oxted by the 1.30 so I presided the greater part of lunch but there were no contretemps. Afterwards I assembled the House outside and when the others came out from College Hall, Graham and Rawson, the Captains of House Football and Juniors respectively went across to Ashburnham and fetched the Junior Cup while we shouted ‘Ashburnham’ til we were hoarse and Ashburnham shouted ‘Grants’.

Struggled with an essay on the ‘Function of Imagination in History’ and waxed quite eloquent on the subject of Macaulay. Later did accounts which more or less came out.