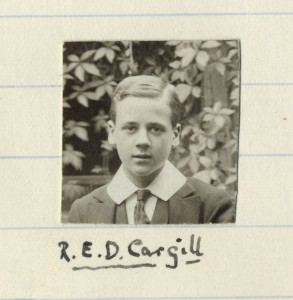 Last night at 9.30 I was up in my room with the light on when whoever it was who had had a bath came out of the bathroom. Seeing the light he scuttled up stairs and I heard a loud whisper ‘Look out Lawrie’s up there in his room!’ I was amused at the use of my name. I suppose I am habitually spoken of as ‘Lawrie’.

I gave Smurthwaite leave to go out for a walk but refused Cargill, subsequently I gave them both leave as Father had told Smurthwaite if he wanted to go out he could ask me so I took it Cargill might do the same. Just before they started off for South Kensington Museum, Smurthwaite appeared and said ‘May we get a bun if we are hungry?’ I said I doubted if they could but though they might hold out till they got back.