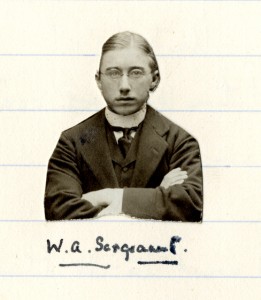 An uneventful day. It had rained in the night so much that there was no ‘station’. I went for a walk with Sargeaunt in between Schools and had my hair cut. I had much difficulty in keeping awake with Forbes this afternoon and was so cold during prayers that I trembled all over.

Sandow’s in evening in consequence late back for tea, but I managed to keep conversation going ‘fine’ as the Americans say. Thank goodness it is Hobson’s week and he takes Prep Monday, Wednesday and Friday. I had a terrific long conversation with him tonight on many subjects and we both got to know each other better by it. I asked him how he stood in the Graham-Marriott row and I gather that Graham and Miles are prepared to let matters slide but of course Marriott is the trouble and carefully nourishes the fire. He is a silly fellow at an awkward stage.

I was much amused at lunch when I heard him talking about someone having a ‘swollen head’. I find Hobson also had much ado to keep from laughing. Marriott’s carefully ‘got up’ conversation about Monitors are very funny; I hear he asked Tunnecliffe openly when he was going to leave and wondered who the next Monitor would be! ‘It is ill waiting for dead men’s shoes’, my friend and you will not be a Monitor while I am Head of Grants if I can help it.

Bye the by Roland Reed came in to tea with Father this evening. He is a nice fellow but not as delightful as his brother, perhaps because I don’t know him so well. He tells me Gordon Reed has got very nice rooms and played in the ‘Freshers’ match but ‘took jolly good care not to get knocked about’, a most characteristic Reedian saying and somewhat sums up his attitude towards Football though he was a ‘Pink’ his heart was never in the game.

I was amused as I went round Dormitories tonight the Professor made an awful scuffle with the clothes as I opened the door and before I turned up the light. I had to say it was ‘a narrow squeak’! They were much amused and the Professor explained he didn’t know the half had struck!