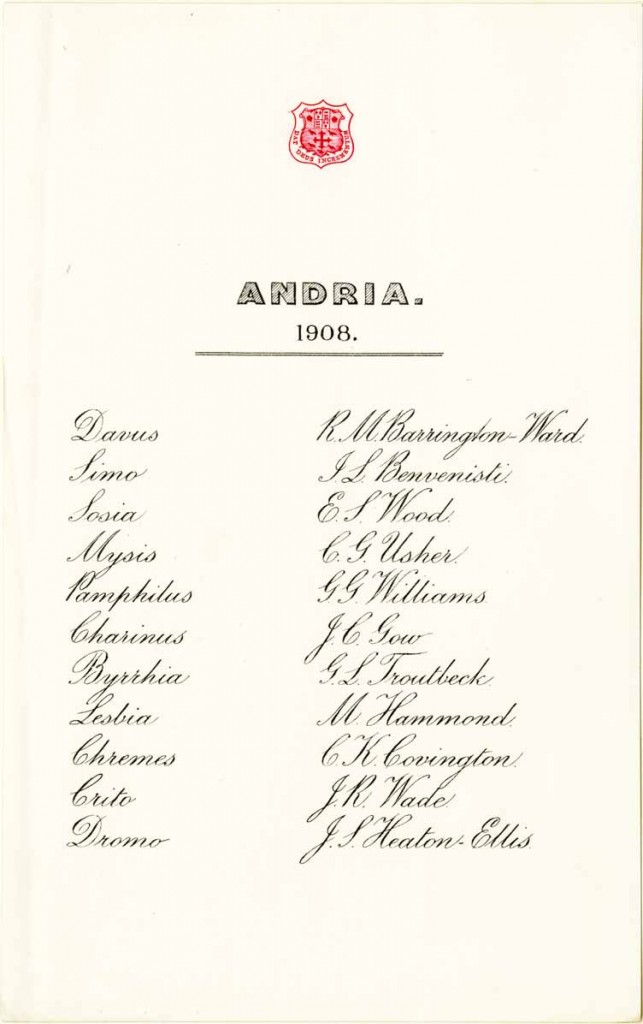 Last night, the last night of term is always rather a trying one with the immediate prospect of holidays, consequently there was bound to be some noise and excitement to which I turned an indulgent ear only remarking that we could dispense with the choruses Hall wished to shout out of tune!…

I was genuinely sorry to say goodbye to Tunnecliffe who is leaving. Poor chap, he was dreadfully upset. He has been thoroughly nice all this term and it is sad to have to break up our little quartet of monitors just when we had settled down so well together. Also Tunnecliffe is only a few days younger than I am and now he has left it leaves me considerably older than anyone else in the house.

There was less squash in the Gods tonight, curiously enough, than on the first two nights. The Eton people were there and some other oddments from other schools and one fearful person who appeared in tweeds (tweeds think of it at the Westminster Play!) from University College and who insisted on asking questions of Low to his extreme disgust and my somewhat amusement, about the Play for his School ‘Mag’. ..

I did not think on the whole the Play went quite as well as on the other nights, it may have been only my fancy. Of course, as I have written before, to Barrington Ward and Benvenisti fall the honours of this year’s play. The cast as a whole was extremely good and quite up to and even above the high standard of the best traditions of the Westminster Play.

Thus ends my first term as Head of the House, and on the whole I think I have every reason to be satisfied with the result. I have established my position far more than I ever thought possible and what to me is more extraordinary I think I may say truthfully that I am popular with my House. If I can gain the respect of my House for myself as an individual I would ten thousand times rather have it than mere respect for myself as holder of a high position, because the second follows the first. It is this feeling of respect and affection that I desire so that I may be able to influence people for their good and I think may truly and thankfully say that this term a step has been made in the direction I desire.