The Doctor (Troutbeck) strongly discouraged my going to Tooting today to have tea with Forbes so in spite of sketches to show me the way which arrived this morning, I wired to say that I couldn’t come. 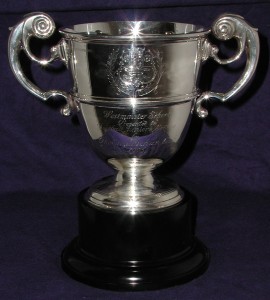 Low wrote me a little note inviting me to tea if I was well enough tonight so I wrapped up and went over. I found that I was the only ‘alien’, the party consisting of most of the Ashburnham Upper, that is to say Low, Ham, Goodall, Jerrold, Oxley and myself. We had a very pleasant little tea but conversation was mainly between Low and myself. I apologised for having to spoil the symmetry of their mantelpiece by having at some future date to remove the Junior House Football Cup. They asked me when I was coming for it, naturally as Low remarked they are in no hurry. I was glad the subject was broached as it is etiquette that the holders shall make the first advances.