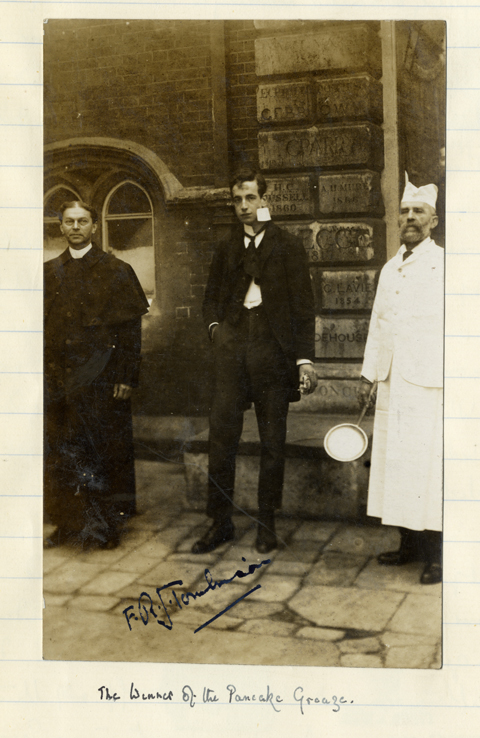 A much shortened 3rd hour owing to the Pancake, the bell going at 12.30 and for once in a way I had a good view of the Greaze, my last while at Westminster. There was a good crowd of spectators when the Cook arrived preceded by the Abbey Verger with the Mace. He as the papers say ‘took careful aim’ and the result was an excellent ‘toss’ right out in the open. The Greaze seemed shorter than usual, Tomlinson bellowing in Tomlinsonian fashion from the inmost recesses. When they picked themselves up very much like those boxes which open on to smaller boxes, Tomlinson was holding the pancake in a tight ball and with collar undone and general disreputableness in approved fashion was led off to receive his guinea from the Dean. Thus I am proud to say that the only two possible things to be physically won have been won by Grantites; a prosperous beginning to (beginning I write, I should rather remember that on Wednesday half my year is over, alas! and alas!) my year of Office. Low went ‘in’ for the VIIth and told me that he was on top of Tomlinson but couldn’t get it. This makes the third year running a Grantite has won it.

About teatime arrived Beeching to see ‘Mr Lawrence Tanner’ and he then asked me if I would come and fill a gap at his dinner-table tonight as Austin Dobson had failed him owing to the death of a brother. I was delighted and felt honoured. So at 7.30 I went and Mr Sargeaunt and myself arrived together to find E. V. Lucas and Barrington-Ward already (Barrington-Ward tells me he had had to tie E. V. Lucas’s tie as E. V. Lucas remarked that his man who always did it for him was out!!) there and presently there came Sidney Lee, A. C. Bradley, J. H. Aitken who writes on the 18th Century and Anstey Guthrie so just for once I experience the delights of a real literary party.

After dinner Beeching showed us a print of Atterbury which subject brought forth the observation from John Sargeaunt that perhaps Atterbury must have had something wrong with his face for none of his portraits are quite full-face.

Eventually Ward and myself made out exit about eleven, being the first to go. We both enjoyed ourselves enormously.