. Today the new boys commence fagging so I got hold of Smurthwaite and told him he needn’t fetch Father for lunch, little Tunnecliffe better do it — to which he replied in a disappointed manner ‘Oh needn’t I. I should so love to!’ I had to say ‘No I was afraid he couldn’t Tunnicliffe had better do it’. Then I found Sorley and gave him first choice whether he would take my boots down at 9 and tidy my table bringing my boots up again at 9 in the morning or whether he would make me my toast when fires begin. I advised him to do the former as I didn’t see him in my mind in the midst of the scrum round the fire. He chose as I suggested and turning to Smurthwaite I said ‘Then you will make my toast’ to which this remarkable child replied ‘Is that all, can’t I do something more, I should so love to’!! Much taken back I said ‘Well if you are so anxious you can bring up my boots in the morning at 9 if you like’ on which he thanked me profusely!

I asked Sorley how he was getting on and he seemed to think better again impressing on me the fact he got on well with his Dormitory. I think as a matter of fact he is settling down; the clouds on his face seem clearing.

I had a tremendous long talk with Barrington-Ward this afternoon. I find we have much in common and I think we shall get very friendly. I find he squirms as I do when I read Eton, Harrow, Winchester, instead of Eton, Westminster, Winchester and we are both anxious to advertise the School unobtrusively or rather keep it before the Public Eye as much as possible. He took me into College and showed me a series of notebooks kept by former Captains back to 1815 of Play Expenses, who were asked and why, accounts, rules and customs etc. which interested me intensely. 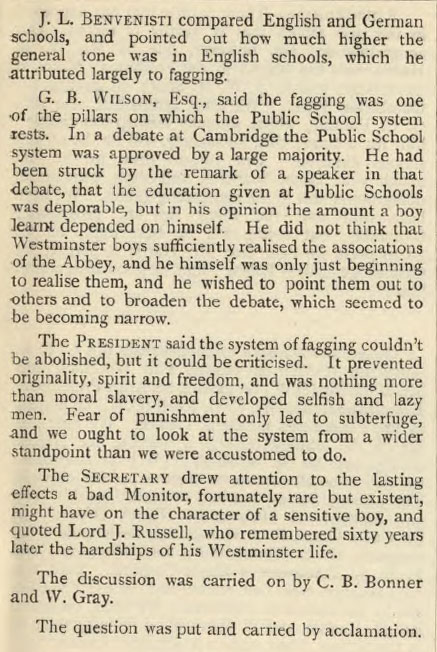 In Deb Soc this evening Forbes and G. B. Wilson came up. The Debate (That this House approves of the system of Fagging) was fair, not very good. Barrington-Ward got up and made an impassioned speech on the evils of the fagging system and the deceitfulness etc. it led to. The House drank it in open-mouthed to hear the Captain saying such things. I was intensely amused, when he sat down he passed across to me the laconic note ‘Exactly as I expected, the House is far too honest’!! In a pause I found myself upon my legs unknowing whether to speak for or against. Eventually I followed Barrington-Ward’s lead but was hampered by continually thinking of arguments the other way to which I was speaking. I told the House the incident of Lord John Russell and the glazier which amused them and enlarged on the misery a bad fag-master might produce. The motion was carried by acclamation.

‘Having up’ John has had a salutary effect and no whispering was indulged in in Prep which I took tonight.