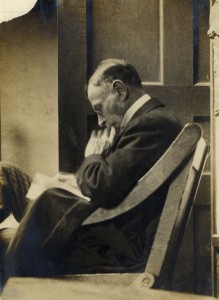 Nothing of especial interest has happened today. I employed Morning Prep in copying my predecessors as Head of Grants into the House Ledger.

Third hour we went to John Sargeaunt. Wood worried J.S. this morning so he couldn’t resist having a hit at him. Pope had just stated in the Satires that a poet’s estimate of his own works was very different from other peoples. J.S. turned to Wood as the bell went and said ‘Do you understand this?’

‘There is a great difference’ sayeth J.S. ‘between your thinking you understand a poem and your doing so’ and just as we got up J.S. added ‘and I don’t think you do!’.

In prayers they have put a new organy thing round almost behind me on the Monitorial where it wheezes and squeaks away and comes out like an infuriated bee at intervals.

Afterwards I went over and heard Wootton‘s 2nd lecture which was more interesting than last week and most of the experiments came off.

A ‘dicte and saying of the Philosopher’ which I don’t think I have recorded. Father was talking to someone about washing ones hands and turned to the Professor and said ‘don’t you think it is a good thing?’

‘Well’ say he ‘I don’t know, you see by constant washing you may wash away some of the natural juices of the hand’!!