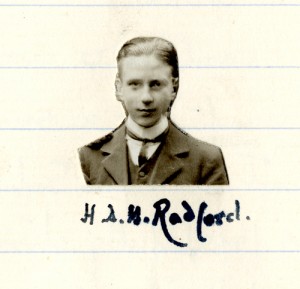 Oh! Thou bloudie man! I am fairly ‘steepled in gore’ today owing to the ruthless slaughter of three children, Collier, Radford and Shore. I was again very nervous, I can’t imagine why, but I managed to control my voice. Whitmore answered my ‘Hall‘, yet another piece of cheek, for the junior person present is supposed to do so.

‘Send Radford, Shore and Collier here.’ They arrive. With a great effort I controlled my shaking voice I flatter myself rather well. ‘Shore and Radford you were out of your Dormitories at 9.25 last night. You, Shore, were in another dormitory and Radford was practically so. Have you any excuse to make.’ Apparently not, at any rate, no sound came. ‘Go out’. ‘You, Collier, were late for breakfast this morning. The bell must have gone five minutes before you came in. Have you any excuse to make?’ Pause then, as a drowning man,

‘I was getting jam I was in the room all the time.’

‘Oh! Go out.’ I wish I could imitate Reed’s ‘Oh!’ It was a masterpiece of biting acidness. Of course Radford and Shore hadn’t got a leg to stand on, they were settled and we decided to execute Collier partly for this and partly for being a general nuisance and general uppishness. Another ‘Hall!’

‘We have decided we can’t take your excuses. I am afraid we shall have to tan you all’…

Then the solemn little procession, Hobson quaking. I took Collier who came first. Hobson took Shore, and myself, again Radford. None of them wished to appeal. I don’t think any were much hurt; I didn’t try much, though I smote Radford somewhat. Much annoyed to hear clapping as the last victim came out. Life’s little vexations! Hobson and myself had a bad reaction of nervousness afterwards!

That disgusting little Professor was out of bed again tonight. What am I to do? I have been cursing my own weakness all the afternoon.

Father left us at lunch and after he had gone someone was showing the Natural History Society card where Usher is down to read a paper on ‘Bacteria’.

‘What are bacteria?’ asks Marriott.

I was disgusted and froze at once but I had not the strength of mind on the moment partly because I was too staggered to say anything. Ugh! That Marriott knew how I should like ‘to bash and crash him.’ As it was I only answered him in monosyllables for the rest of lunch. He saw I was disgusted.

I walked up to the Society of Antiquaries today and looked up some references but not with much success as far as Westminster was concerned.

Afterwards I went into the House of Lords sending in my name as usual to Black Rod (Sir H. Stephenson). As I said to the Doorkeeper one may just as well do these things properly, especially as he remarked after so ‘many little incidents as there have been of late!’ The debate was not uninteresting on Ireland and ended up with a fine and powerful condemnation of the Government by Lord Ashbourne. He fairly ramped and roared. Incidentally I noticed the Marquis of Londonderry said ‘starnch’ for ‘staunch’ thus bearing out Lady Grove in the ‘Social Fetich’.