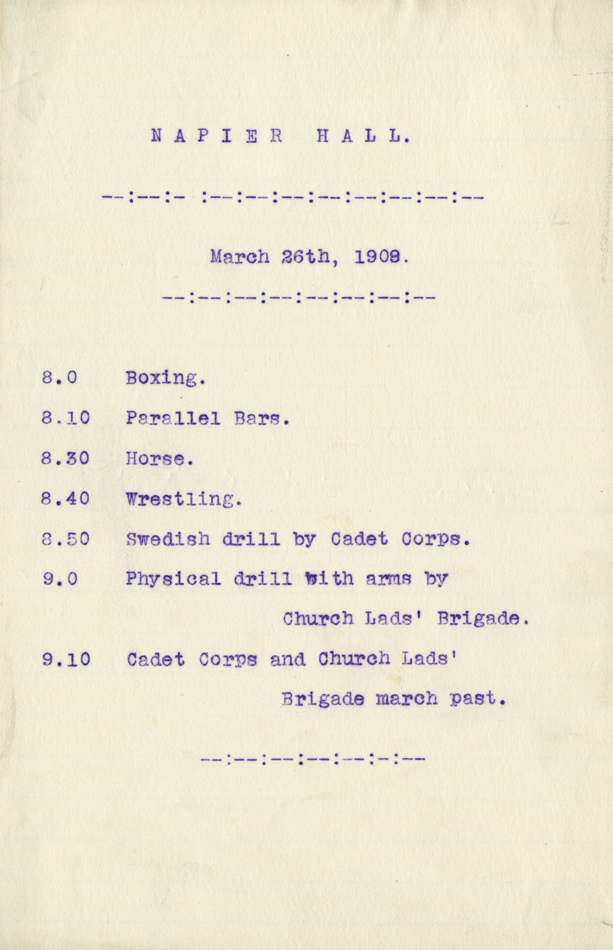 The question is answered: ‘Passed, 3rd Class, Pt II Previous’. ‘Oh! Brave we’ as Dr Johnson used to say, what a genius I am. Gray and Goodall likewise have passed.

Grant’s won both the Senior and Junior Gym Competitions tonight, F. G. Hobson and A. C. Miles being our representatives and thus beating Home Boarders (Bonner!!) twice in three days. Unfortunately the House do not get a cup for this. Gordon Reed came down this evening and I talked to him for some time in Yard and eventually he came into tea late and it was a real pleasure to see him and talk to him again. .

Myself, Hobson, Miles, Graham, Tomlinson, Gilmour and Pemberton then walked forth to the Napier Hall, Vincent Square, dumbfounding Minchin who we met outside who couldn’t conceive where we were going to! We got to the Hall just after 8 o’clock and just before the show began. I was frightfully pleased at hearing a crowd of small ‘scis’ say as we approached the building of course wearing top-hats ‘’ere come some more flower-pots’!!

The Gymnastic display was surprisingly good, far better than I anticipated, and carried out especially the boxing and wrestling with the utmost good feeling between the combatants. Of course Old Wheeler for up and made a speech at the end which gave me ‘squirks’ all through especially when he referred to the Hall which is a very nice one but much like other church Rooms as ‘this handsome and charming hall’ or words equally extravagant. He announced the gift of a rifle and said he hoped another would be subscribed for and at the end of his speech he was able to announce that Mr Hallett (OW) had offered to present one, a statement which caused great enthusiasm.