Father not getting up I had to take Prep this morning. After Prep Collier announced to me he had a rash what had he better do? I told him to go into Mrs Thresher’s room and subsequent investigation disclosed he had measles! Fortunately his parents came down and took him off home.

There was only one school this morning owing to Confirmation. Nall came up Library and together we looked at the prints with a view to rehanging them. Some book Bonner had put down in the suggestion book Nall refused to get saying he thought it was ‘rather strong food’!

We assembled in the Cloisters at 11.15 for Confirmation and proceeded to Henry VII’s Chapel headed by the King’s Scholars. I was reminded of Horace Walpole’s description of the funeral of George II for our procession, like George’s, got confused going up the steps and more by luck than otherwise I found myself next to Hobson immediately behind the candidates, Father, Fox and the King’s Scholars filled the stalls. This service is always the most beautiful of our Westminster Services and today was no exception to former years. In all there were about 35 candidates. 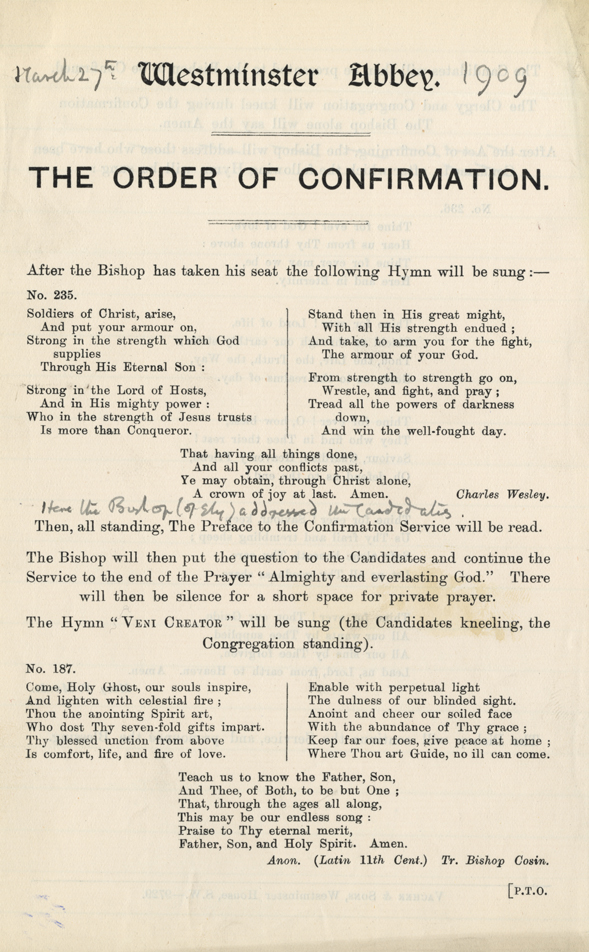 We got out about 12.30. Nall then called me up Library and we tried to arrange for hanging the pictures improvising a measuring tape from the cord of the electric lamp, a brilliant idea of Nall’s with which he was hugely pleased!

Chappie came down about 2.30 and stayed an hour or so and later came the Doctor (Bourns) to see Mrs Thresher who is still seedy and at 4.30 the Wakefields whom I had invited to come and see the home of the Grant’s. They were hugely interested on going up into the Dormitories and all over the house. I showed them the School and they were most appreciative. It is very luck my having found people so willing to help and so interested.

I was just saying goodbye to them at the gate of Dean’s Yard when Gordon Reed arrived whom I took back and we had tea in Hall. The first time I had been down on a Saturday night, we took everybody by surprise. I had a most touching little tribute. Smurthwaite, having just made two pieces of toast for himself when we suddenly appeared came and presented them to me at once, entirely on his own initiative. I think it is one of the highest compliments I have had paid me since I have been Head [of House].